In detail, the following are the most important substances particular to Olive Leaves:

1) OLEUROPEIN is the most highly represented molecule, with an even greater antioxidant effect than Vitamins C and E. This effect is enhanced by its synergy with flavonoids and phenols. Oleuropein’s protective effect on cellular oxidation has been proven by many international scientific studies.

The following recognized health benefits stand out in particular:

What is cellular oxidation? How harmful is it?

Cellular oxidation is caused by free radicals, harmful substances responsible for many degenerative processes and aging.

A free radical is a particularly reactive molecule or atom that contains at least one unpaired electron in its outermost orbit.

Because of this chemical characteristic, free radicals are highly unstable and try to regain their equilibrium by stealing the electron necessary to equalize its electromagnetic charge from a nearby atom.

This mechanism gives rise to new unstable molecules, triggering a chain reaction that, if not stopped in time, ends up damaging the cellular structures (mainly the mitochondria), which are the only structures of the cell, together with the nucleus, that contain the DNA. Mitochondria are the cell’s energy centers, home to cellular respiration and the production of energy needed for many cellular functions, such as movement, substance transport, etc.

It is important to emphasize that the attacked cell cannot defend itself: the oxidative process changes it forever, making it age quickly or, in some cases, literally go crazy, thus triggering the degenerative process.

The production of free radicals is a physiological event and one that occurs normally in cellular biochemical reactions; this phenomenon however is accelerated by external factors, the first of which is:

Fighting free radicals is the new watchword for preventing cancer and degenerative diseases, and for counteracting premature physical and mental aging.

In particular, one study has shown that Oleuropein decreases or even prevents the A-beta aggregation involved in Alzheimer’s disease 5 (20).

The potential effect of Oleuropein on brain function in Alzheimer’s disease is similar to that on Atherosclerosis: both diseases in fact are age-dependent and in both there is an excessive accumulation of certain metabolites (Cholesterol and A-beta respectively) that gradually create the bases for the full-blown degenerative disease.

The connection between heart diseases, hypercholesterolemia and Alzheimer’s is due to the fact that the pathogenetic mechanism of the three pathologies is very similar.

Click on the link at the end of this document to find the important international Scientific Studies on the Benefits of Olive Leaves.

OTHER ACTIVE MOLECULES OF PARTICULAR INTEREST:

It is involved in inhibiting the oxidation processes connected to the phenomena of cellular alteration, which is typical of degenerative and aging diseases such as atherosclerosis, arthritis, cardiovascular disorders.

It can also have beneficial effects on our sight, reducing the risk of developing macular degeneration. It can activate the formation of Glutathione, a strong antioxidant agent produced by our body, active in cellular defense against damage induced by oxidative stress, reducing the melanogenic effect induced by UV radiation.

3) TYROSOL completes the action of major antioxidants; it improves the metabolic activities of our main organs (liver, muscles, heart), supports mental function and also has an anti-stress and antidepressant action.

It reduces intellectual fatigue, producing an improvement in memory, attention, concentration and intellectual performance in general.

In synergy with the other phenols, it has a regulating effect on body weight, with a weight-loss effect in cases of overweight and obesity, thanks to the stimulation of cellular enzymes that accelerate the mobilization of fats from deposit tissues, transforming them into lipids that are easy to eliminate, producing energy and reducing the compulsive desire for food at the same time.

4) ELENOLIC ACID is an antioxidant that improves blood circulation. In vitro it was found to have a very powerful antibacterial and antiviral action with a beneficial effect on the prevention and rapid resolution of infectious diseases.

5) RUTIN (also called “vitamin P”) has a strong antioxidant action that helps fight infectious diseases from the simplest (influenza) to the most important viral infections. It has a noticeable beneficial effect on microcirculation (it protects capillaries from rupture) and fluidifies the blood, thus inhibiting the harmful effects of obesity, cholesterol and high blood sugar. It also acts on the lymphatic circulation of the lower limbs, preventing liquids from stagnating. It has an antihistamine action.

The phytoactive substances present in Olive Leaf Extract influence the levels and effects of monoamines (brain chemical mediators such as dopamine, adrenaline, norepinephrine, serotonin), by inhibiting the enzymes responsible for their degradation.

The result is an improvement of brain metabolic activities with an antidepressant effect, effectively fighting mental exhaustion, helping to maintain good mood and spirits and improving memory and concentration.

The components in Olive Leaves confer a sense of general well-being and energy, and great resistance to fatigue.

The extract is therefore highly suited in cases of fatigue, asthenia and convalescence, and in fatigue related to dysfunction of the immune system.

It has a real anti-stress action; taken regularly it works quickly and safely.

Many studies show that the polyunsaturated fatty acids present in the Extract favor the formation of prostaglandins, which contribute to keeping our blood vessels healthy within the general framework of an overall vasoprotective effect on circulation.

Olive Leaf Extract has proven to be very useful in regulating arterial pressure.

A regulatory action has been found on maintaining the balance between sodium and potassium in serum and urine, as well as on the metabolism of copper in the brain and in the liver, with a link between oxidizing enzymes that contain copper and a reduction of stress hormones – such as adrenaline and noradrenaline – from which a balancing action on blood pressure also results.

The antioxidants present in the extract have a cardiotonic and antiarrhythmic action. Some studies reveal its usefulness in cases of angina, by decreasing the risk of heart disease.

A clinical study has demonstrated the cardioprotective effect of Oleuropein against the tendency to coronary occlusion.

Olive Leaf Extract has demonstrated its effectiveness in mild forms of diabetes, helping to reduce excess sugars in the blood, thus decreasing the need for insulin and improving glucose tolerance.

Its hypoglycaemic properties, which regulate blood sugar levels, can be a valuable aid in dyslipidemias.

The components in Olive Leaf Extract are effective in preventing obesity as they regulate the metabolism of lipids and carbohydrates. In cases of overweight, they are indicated to reduce the fat quota, in particular in the abdominal area.

The product based on Olive Leaf Extract favors the elimination of fatty waste responsible for the formation of cellulite and the so-called “orange peel skin”.

It supports the removal of excess fat, gradually draining and firming the imperfections of “critical points”.

Olive Leaf Extract produces vasodilation and induces an increase in diuresis, favoring the renal elimination of numerous catabolic substances (waste substances involved in inflammatory and deposition phenomena, even at the articular level such as the acid uric in gout).

The anti-inflammatory action of Olive Leaf Extract is due to the Bioactive Polyphenols it contains. These are mainly Oleuropein, Hydroxytyrosol and Tyrosol. These precious molecules of natural origin inhibit the release of enzymes that support inflammation, reducing pain and regulating the action of immune cells in order to allow the body to defend itself and regenerate in the most balanced and healthy way.

Based on the recognized antiviral action of Olive Leaf Extract and the numerous anecdotal reports regarding AIDS patients who used the extract, it has been widely used to strengthen the immune system, reduce the viral load, alleviate chronic fatigue, assist in the treatment of Kaposi’s sarcoma, Herpes Simplex virus infections, and reduce the side effects of antiretroviral drug therapy.

There are many tests and studies that indicate an antiproliferative action of the phytocomplex in question. Oleuropein has been shown to inhibit cell proliferation in some cancers.

An interesting and recent study has analyzed the effect of the phytocomplex on pancreatic cancer, the fifth leading cause of cancer-related death in the world.

The study compared the content in phenol compounds, total flavonoids and Oleuropein, with the antioxidant capacity and anti-proliferative action tested on pancreatic cancer cells. 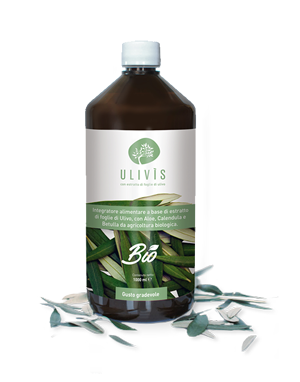